Under the Redcoat 2011 After Action Report 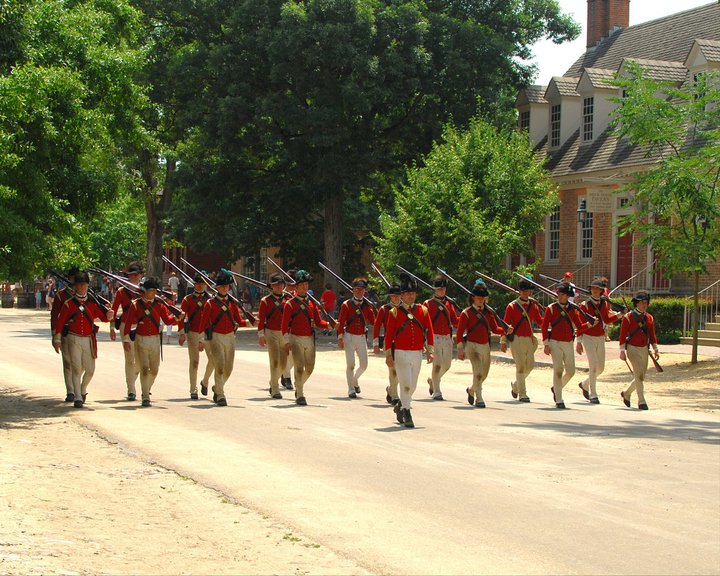 The 2011 edition of Under the Redcoat showcased how interested, motivated units are able to work together with Colonial Williamsburg interpreters to present a mature, polished program.

There were additional participants; some Royal Welch Fusiliers, several members of the 55th, 71st, and 76th Regiments, as well as HM Marines. The 55th and 22nd joined forces to be a composite unit, as did the 71st and 76th. As both are white faced units, HM Marines fell in with the 43rd, although not without a certain amount of friction (about more which later!) Regiment von Huyn hosted a number of soldaten from different German units.

We also enjoyed the wily efforts of a famliar Opposition Force:

Sprinkled throughout this report are photos from various albums; many of which were originally posted on Facebook. There are links to the full albums at the end of this AAR. In addition, there are several videos embedded from YouTube and Facebook. If you are the owner or copyright holder of any of these images or videos, please contact me for proper credit.

Friday arrived "bright and dry"; the occasional sunshine belying the predicted thunderstorms. In fact, threatening dark clouds and crashing thunder did pass to the south of town, but all in all the Historic Area was spared. We probably had twenty drops of rain on us all weekend!

Revolutionary City has long incoporated a "Taking the Town" scenario in their regular programming, but Taking the Town takes on a whole new aspect when it is accompanied by several dozens of Redcoats as opposed to the usual handful of Colonial Williamsburg interpreters. 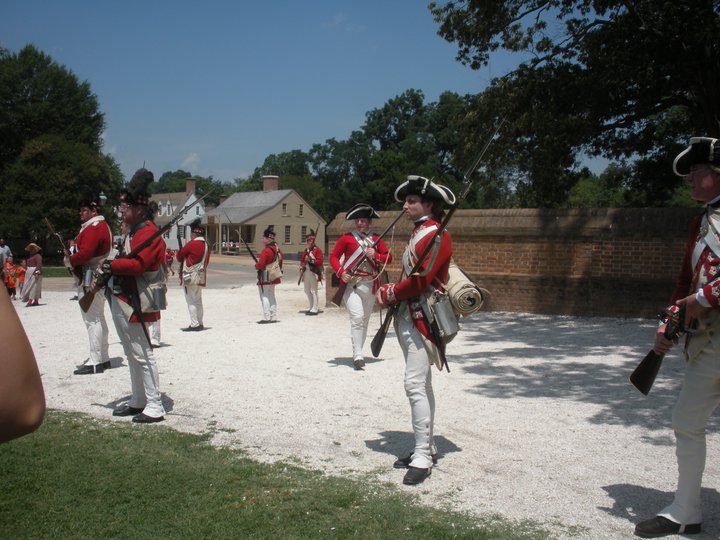 We did this one without benefit of a rope line, the crowd being held back solely by the press of Redcoats with fixed bayonets. Considering the number of King's troops present to re-establish Royal authority, the crowd displayed a daring amount of Rebel fervour, although there was a gratifyingly warm reply to the admonition: "God Save the King!", including a hearty response from a gentleman in sporting clothing, carrying a fowling piece and a pheasant!

The town thus secured, the advance party proceeded to Market Square to keep a watchful eye on the inhabitants, and make ready for the arrrival of the main force.

The camp was laid out by Sjt.-major Savage, along with Pioneer Jenks of the 33rd, with the welcome assistance of Sub-Engineer and Lt. Lynch; who used his transit to keep the lines square. The camp was planned according to the canvas count derived from the registration forms; the numbers of tents determining the layout of the Company streets rather than a strict order of Regimental precedence. We tried something different than the more ususal grid of garden stakes and twine: we staked out the corners of the streets with hand lettered signs, figuring that experienced 18th Century soldiers would have had no difficulty understanding that you line up your tents between the two stakes with your Company letter on them. It seemed perfectly simple, and yet…

At 3:00 p.m., the main body of the Provost Guard marched in. It was magnificent, as these videos will attest:

The March In is one of the scenarios that best shows the benfits of co-ooperation between Colonial Williamsburg's departments and the re-eanactors. The troops came in, tired and battle worn, with their military dependents following behind, along with Colonial Williamsburg's ox-drawn Virginia Wagon loaded down with soldier's tentage.

The camp went up with surprising speed - perhaps not surprising considering the numbers of troops available. The layout of the Company streets was evident to most, and if there were any questions an overall map was available. Sjt.-major Savage would love to have seen the whole process through, but he was obliged to repair to the Capitol end of town to partipcate in the walk-though of Saturday's Review. 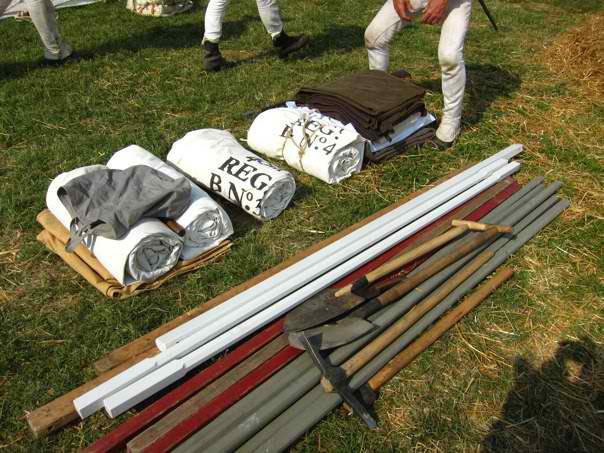 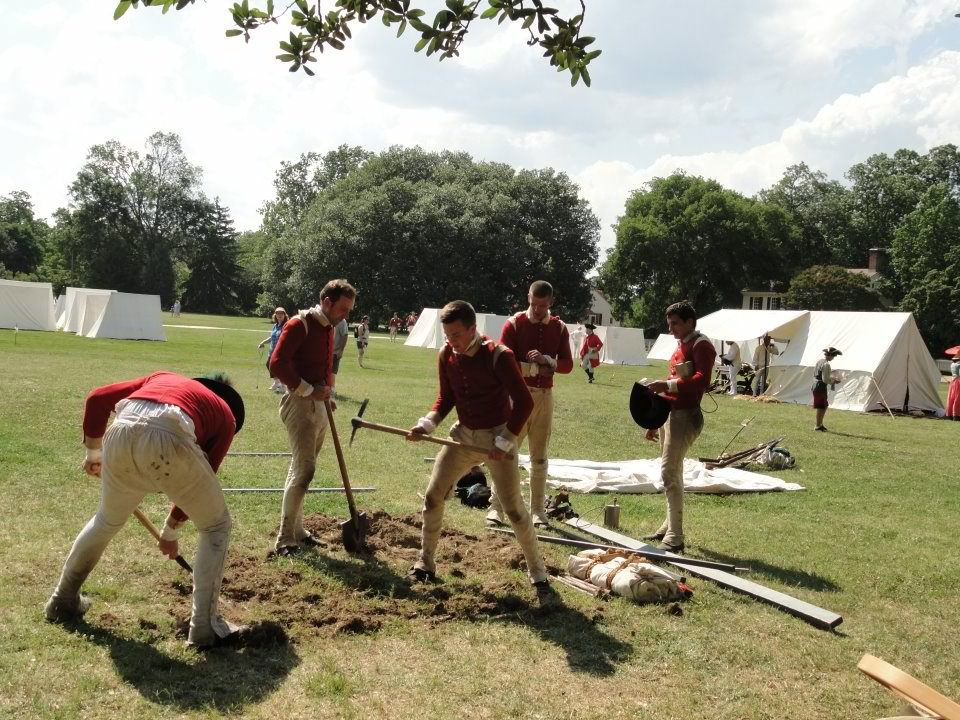 Meanwhile, back in Market Square - there was one unit that had difficulty with the concept of lining up your tents between two stakes with the Regimental number on them. Somehow they got it in their minds to line up on one of the stakes delineating the Marquis line, and ended up having their tents angle off through the Company street! Mortification prevents your correspondent from mentioning who they were, but it was observed that they had red facings.

Despite that, the camp eventually went up, especially after 6:00 p.m. when private vehicles were allowed in.

Saturday began UTR in earnest. A gratifying number of Crown forces lined up for the safety inspection. 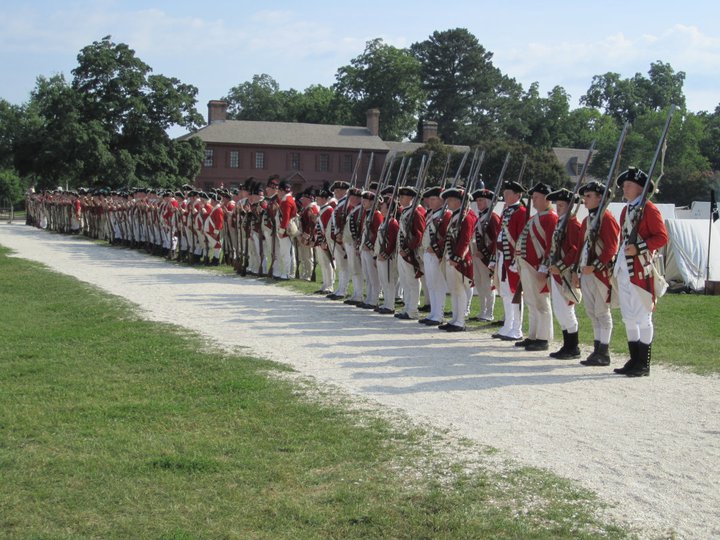 The security of the town and its inhabitants was paramount. We set out to restore Royal Authority with a firm hand. Our first order of business was for the 43rd and 64th Regiments to start the guard rotation at the Guard House. 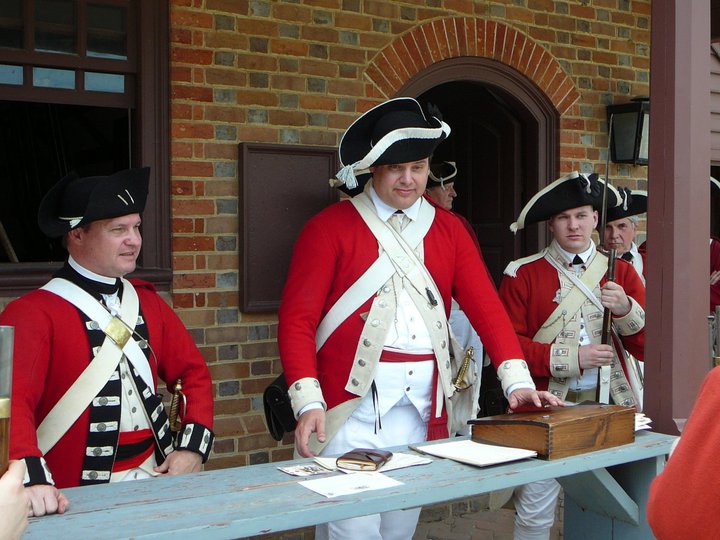 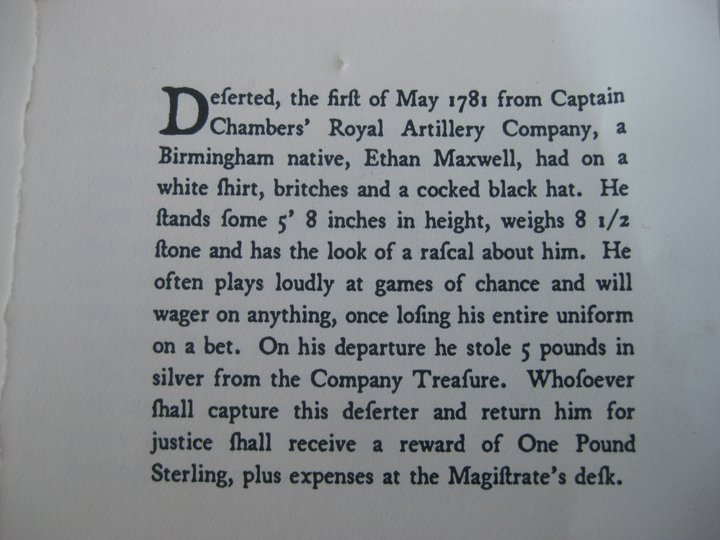 In a change to our usual procedure, the German forces operated somewhat independently of the Redcoats. The Germans were responsible for the security of the North end of camp, establishing a sentry post at the barricade on North England Street, doing everything according to German methods and practice. 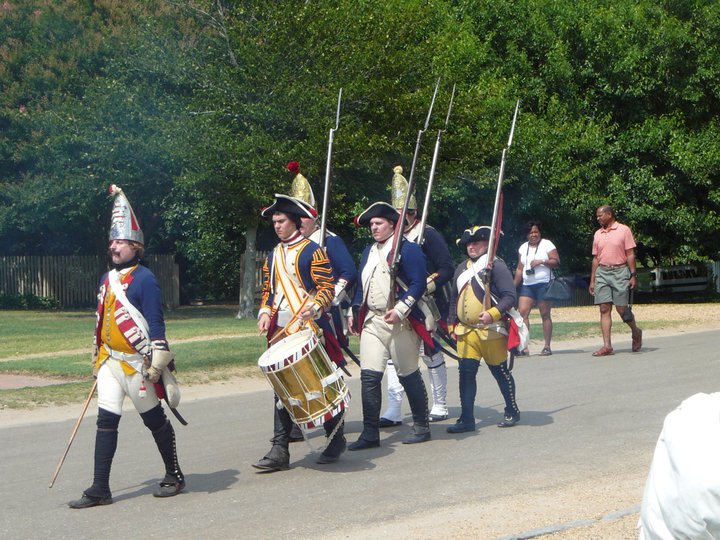 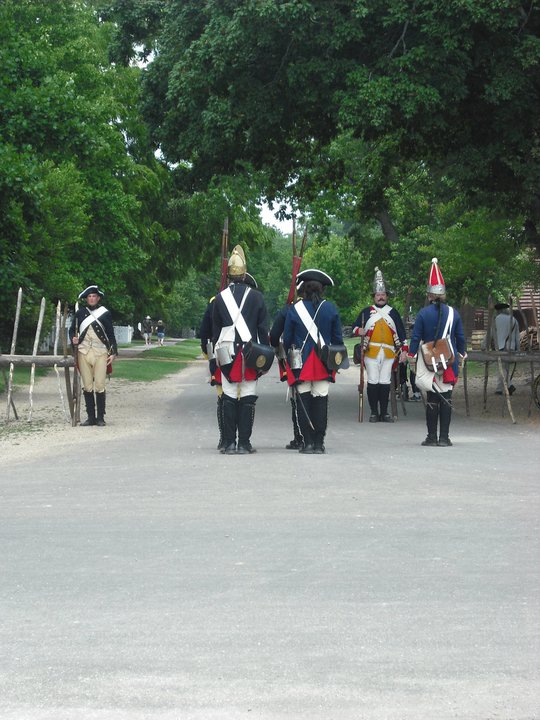 Vigilance was essential, because we had a most worthy opponent.

Sealed Instructions for the Hillsborough District Militia: Under the Redcoat - 2011

1. The Hillsborough District Militia will run one official "Spy". Spy identification: the spy must have concealed on his (or her) person a map of the Historic Area, with military information noted. This information will include the composition of the Provost Guard, the units, numbers of troops per unit, location of principal military sites, a description of the guard posts, their location, and the number of soldiers at each one with their frequency of relief. The spy may prepare the map in advance, but he must make the notations during the event. No fair copying the unit names from the unit commander's letter! The spy need not confess unless this paper is discovered. The official Spy Map must mis-spell "Nicholson Street" to "Nickleson Street".

Spy bonus #1.The Spy must produce a seating chart for the Saturday Provost Guard Officer's Mess, showing the names of the officers and where they are seated.

Spy bonus #2. He must place a letter on the table set up at the Town Major's tent. The letter will be addressed to "Captain Sheffer". The text of the letter will be simply: "Vigilance is the price of Freedom, or, in your case, Tyranny. Sincerely, YMH&OS, The Spy".

Spy Bonus # 3. The Spy must place a letter inside the lap desk at the Guard House. The letter will be addressed to "The Captain of the Guard". The text of the letter will be simply: "You have been spied upon. Sincerely, YMH&OS, The Spy".

The Spy Bonuses must happen between the hours of 10:00 and 4:30. The spy must accomplish these tasks himself. He may not use accomplices.

2. Deserters You will provide two deserters. You will provide deserter descriptions including hair color, height, complexion, and clothing. One deserter will be named Ethan Maxwell. The other will be named William Harris. Your deserters need not use these names during the day, but the official deserter descriptions will be published with these names on them. The deserters must pass through both Barricades (Duke of Gloucester Street, and England Street) at least three times during each day. You are successful if the deserters remain uncaptured by retreat on Sunday. If they are detained or arrested they may be subject to search and/or questioning. A deserter need not confess to being the official deserter unless the following conditions are met (this is to weed out the "self-appointed" deserters): if he is questioned by the Deputy Provost-Marshal and he asks "Where did you sleep last night?", Harris and/or Maxwell are to answer "at the Burnt Ordinary". If he is asked three times in a row "Are you William Harris?" (or Ethan Maxwell), he must confess.

All Deserter, Spy, and smuggling activities are to occur between the hours of 10:00 a.m. and 4:30 p.m. on Saturday and Sunday only. All other times are invalid. 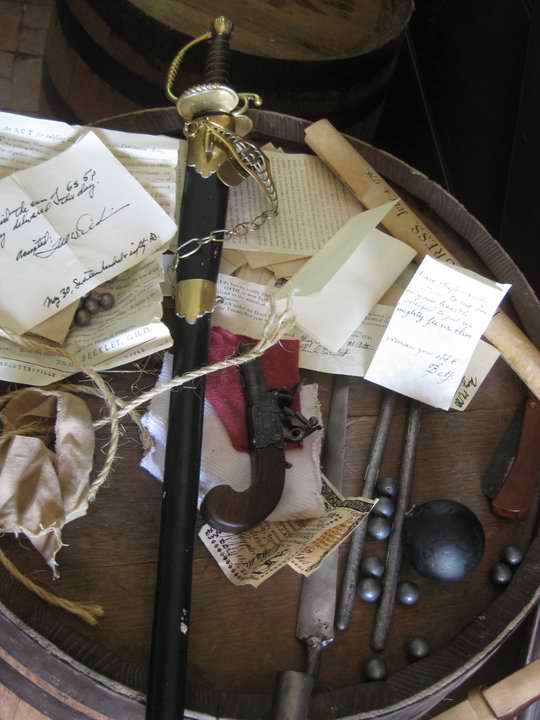 The open nature of UTR invites participation by many "guest players" who operate over and above our official opposition force. We capture a great deal more contraband than they smuggle, and apprehend many more "deserters" and "Spies" than are claimed by our official opposition. Let me offer you an example. On Saturday evening, I received a report from our opposition commander:

That's quite an impressive list. As for the five officers which were grenaded, I have to take that personally because one of them was me! There I was, in my tent, minding my own business (changing from my torn Trowsers into Breeches), when there was a shadow at my tent flap. THUMP! A round black object rolled onto my blanket. Fortunately I was able to extinguish the fuse, but with my trowsers around my ankles, I was not in a position to give chase to my would-be assassin. 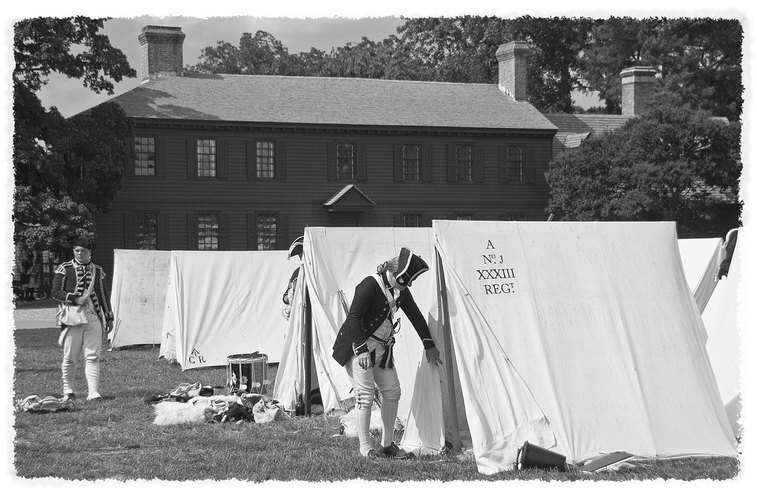 The scene of a dastardly act. ©American Revolution Photos

However, the Redcoats were not entirely unsuccessful in their own efforts. The "Property Siezed" records book from the Guard House lists: 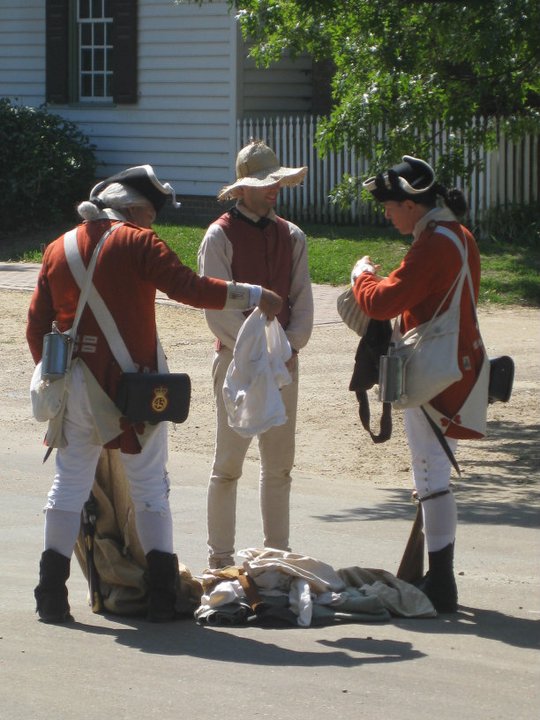 Not an exhaustive list , perhaps, but the Redcoats were also aggressive about seizing back the passes and paperwork of miscreants; so much so that Todd Dickinson (commander of the Hillsborough District Militia) had to plead with the Redcoats "We have to have some form of ID that is not going to land us in jail on sight. All was confiscated @ afternoon Sat. Need return of cuffs and all papers seized. Lots of work + the basis of our identities. " 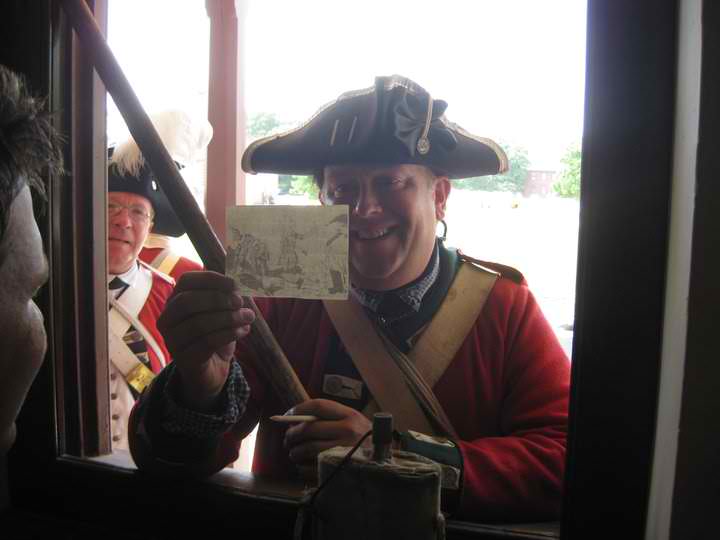 That got sorted out by explaining to the troops on guard that taking away the passes and paroles would just generate more work for them, because they would have to keep issuing them over and over. That still left quite an assortment of odd bits of paperwork detained at the Guard House:

Then there were the curious messages passed to me which attempted to implicate members of the 33rd in seditious activities. Several of them had hearts and clubs from playing cards drawn on them as some sort of "code".

Meet our guy w/the signatures and passes at the determined location. His name is Lance-cpl McGee, of the 33rd Regt. of Foot. Brown hair, baby face, bad British accent. Retrieve the asset and give it to me.

Private Niles Kynett and Michael have, to the best of my knowledge, has been patrolling & brought seditious materials purported found and returned to him. [signed] Major Robert McLeroth

Msg for Sargeant Major Savage. I have a private message from Josiah Chowning Tavern proprietor regarding his hospitalities liberties and limitations. Your humble servant, Alex Walker

Wait - that last was was legit. Chowning's had such a run on ice that they had to close the machine off until it could make some more ice. I had to give the troops a heads up on that.

Sunday we successfully passed through guard posts going in then out with the following: