Before the Siege: The British Army in Yorktown is not scheduled for 2021 at Colonial National Historic Park.

Colonial National Historic Park regrets that the uncertain nature of the future regarding the pandemic makes it impossible to commit to doing public events for 2021.

Please enoy the rest of the Before the Siege web site as a reminder of good times past, and a hope for good events in the future!

Do you see that map segment up there at the top of the page? The street with all the houses next to the letters “Y O R” and “T O”?

That's where we are going to be!

That is Main Street in Yorktown. It will be our pleasure and privilege to interpret the British forces under Lt.- General Cornwallis as we dig in and fortify Yorktown in the weeks before the Continentals arrive and the siege begins - on the exact same historic ground where it really happened 239 years ago to the day!

Right next to the “T” is the Nelson House, one of the signature historic buildings that has survived since the time of the Siege: 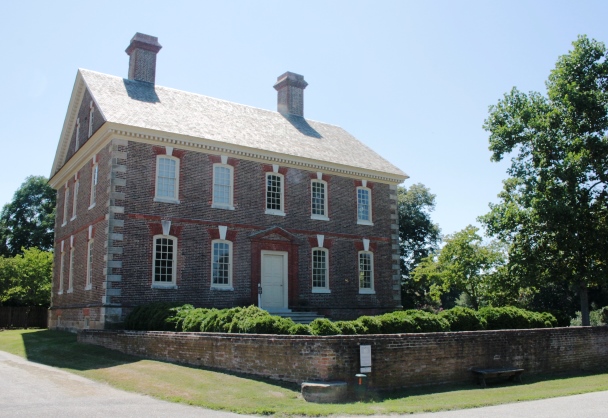 Yes, it's a survivor!

Before the Siege will place heavy emphasis on both the military and civilian aspects of life with the British Army during the latter days of the American War for Independence. The forces under Cornwallis are confident but wary - a few weeks ago a French fleet of 26 ships showed up in the Chesapeake! We are keying the program around the actual daily events of September as recorded in the 43rd and 80th Regiment Orderly Books, as well as diaries and journals of officers and people who were present at Yorktown.

Main Street will be the centerpiece of our activity as we present to the public a sample of what life was like in Yorktown in late September of 1781. Officers will plan and co-ordinate the defences of Yorktown, soldiers will camp, do picket duty, drill, and patrols, the Royal Artillery will prepare and do maintenance on the guns, the Royal Navy will continue to establish the waterfront defenses and maintain communications with Gloucester, attached civilians will perform chores and duties which earn them their rations, artificers will repair arms and equipment, and the remaining Yorktown inhabitants and Loyalist refugees will do what they can to support the military effort.

Before the Siege will be an excellent venue for military units, as well as groups and individuals who present civilian life, and who are strong on interpretation and have a solid grounding in the material and social culture of the American War for Independence.

Participation in this event is by invitation only. For information on how you or your unit may receive an invitation to participate in this event, please write to fortifyyorktown@att.net